I had a question from a client recently about making harmonics sound properly. In particular, he asked about picking-hand ‘slap’ harmonics in my arrangement of “Moonshadow” in Travis Pick the Hits! I will discuss technique using that example.

If you need more information about playing harmonics successfully, I’ve written an extensive article that you can read here.

At measure 60 in “Moonshadow” (shown below), I barre the four treble strings at the 2nd fret, an Amajor chord. This must happen quickly, as I have just fretted two individual strings with fingertips, and pulled off one of them. For you to approach creating the sound I get on the recording that accompanies the book, make sure the index-finger barre is placed directly behind the second fret wire, and that the finger is bent slightly backward at the first knuckle so that the first string is not fretted and does not sound on the ‘slap.

My picking-hand index finger sharply slaps the second, third and fourth strings at the 14th fret – 12 frets above the barre at II. I straighten my picking-hand fingers, and bend my wrist sideways a bit (toward the little finger) so that my fingers are close to being parallel to the fret wires. With the straightened index finger, strike the three strings sharply right on top of the 14th fret wire. Bounce off the strings immediately! Don’t hold on – that will mute the strings. Make sure to strike the strings with the fleshy pad between the fingertip and the first knuckle. Likely, this will take some practice to make the strings ring. (And it may hurt a little!)

One thing I notice about my technique: as my ‘slapping’ index finger hits the strings, the base of my thumb lands on the top of the guitar, above the bass strings. This allows me to follow through strongly with the index finger, avoiding being ‘wimpy’ when bouncing the index finger off the strings.

If you have a resonant guitar with new or newer strings, and you fret and strike the strings correctly, those three notes should ring out well. 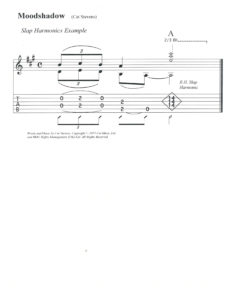