For the “A” shape (see diagram below), I start by fretting the root note on the fifth string with my index fingertip – no barre at first. Occasionally I barre the actual “A’” shape with my ring finger in front of the index finger. I never fret all three “A”-shape notes up the neck with three fingertips – for me that’s too many fingers in too little space!

For “A” what I normally do is what I described for the “D” shape in the previous segment: I fret the three important notes of the chord with three fingertips. My index frets the root on the fifth string, the ring frets the fifth of the chord on the fourth string, and the little finger frets the third of the chord on the second string. Then my picking hand picks the correct strings – the fretted ones! This can move all over the neck, with the note under the index finger being the “root” note: the name of the chord.

If I want to play other scale notes on the treble strings around this chord I often barre with my index — which provides access to some notes on the treble strings — and fret whatever other treble notes I need by moving my little finger. The extra scale notes are notated as smaller circles in the final chord diagram below. The lone 4th-fret note I fret with my middle finger.

I’ll write more next installment on one of my favorite all-time fingerstyle chord shapes: the versatile and moveable C! 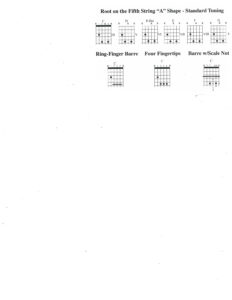