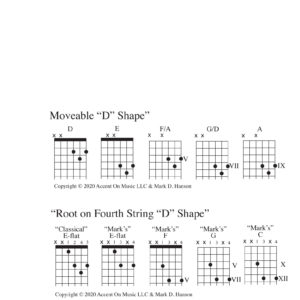 Earlier I wrote about my “six-chord” neck visualization method, with two chord shapes anchored on each of the three bass strings. The advantage of knowing this is to gain access to a different range of melody notes on the treble strings while fretting the root note in the bass. Let’s start with the fourth string.

This shape, of course, can slide all over the neck without fretting anything below the three treble strings. (See the diagram.) Try moving it up two frets and picking the open E string in the bass. Voila! An E chord. Be aware though, this is a FINGERPICKING chord. You can’t strum it, because the open fourth and fifth strings aren’t chord members.

But, fretting the root note on the fourth string allows you to play ANY chord (B-flat and E-flat included!), not just ones that have an associated open bass string.

I move the little finger for different melody notes in the treble, and sometimes barre the four treble strings with the index to produce other melody and chord tones.
Copyright © 2020 Accent On Music LLC & Mark D. Hanson

7 thoughts on “Chords With Root on the Fourth String”