Note: This article references my bluesy rave-up fingerstyle arrangement of “I Left My Heart in San Francisco.” A video of me playing it in Santa Barbara in August, 2017, has been posted here on YouTube: The actual music starts at about 0:35. 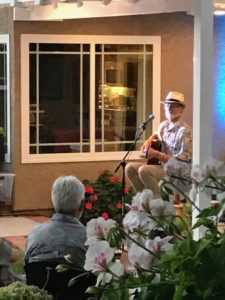 Perhaps you have come across the term “Tri-tone substitution” in your studies, and had a hard time understanding it. Here’s an easy way to understand tri-tone substitutions: Think of them simply as dominant-seventh chords resolving down a half step – F7, instead of B7, going to E, for example.

Most of you use B7 to resolve to E. That’s a “V7-I“ chord progression, the one that largely defines “Western” music. In fact, I play B7-E twice in the bluesy intro of “I Left My Heart in SF.”

But for a refreshing change of harmony, at 1:17 in the video I use an F7 chord to drop down the half-step to E. That chord change – using an F7 instead of a B7 before E – is a “Tri-tone substitution.”

(The Tab/notation for “I Left My Heart in SF” is available here.)

The name comes from the fact that these two notes – B and F – are six frets apart, or three whole steps. This interval is called a “tri-tone.” Hence the name “tri-tone substitution” for using F7 instead of B7 to resolve to E.

This substitution works so well for this reason: the two chords share the same pair of notes that create the active interval, the ‘tri-tone” that our Western ears find unsettling. (A and D# in B7; A and E-flat in F7). To our conditioned ears, this interval wants to resolve no matter what other notes surround them – F7 and B7 are the same chord functionally, just with a slightly different color. More on these ‘surrounding’ notes later. (B7 includes an F# note; F uses F-natural, naturally…)

The added benefit of an F7 to E progression is that you create an additional chromatic move (F to E) that is so powerfully suggestive in Western harmony. Listen to jazz bass players – they regularly play the note a half-step above the chord they are going to, even though that note is not in the key. Another thought here: a bluegrass bass player might get fired for playing that note! It’s all about the style and the effect on the listener!

Using a G7 chord, the following list shows you the effective ways to resolve a dominant 7th chord:

Experiment with these resolutions of dominant seventh chords in your arrangements and composing. They can add a refreshing sound to the harmony, and keep your listeners on their toes. You don’t want to bore them!

Here’s an easy way to determine a chord’s tri-tone substitute on the guitar: the substitute’s root note is one string and one fret lower than the original V-chord root note. Or, even easier: its root note is one fret above the root of the chord you are ending on. This works on every pair of strings in standard tuning except the second and third, which are tuned in the interval of a third, rather than a fourth.

Note: In the classical world, using a dominant seventh chord to drop one half-step (F7 – E) is called an “augmented sixth.” That has to do with the spelling of the notes on paper (or onscreen, these days): “F augmented 6th” has a D# in it (F scales’s augmented 6th note) not an E-flat (F7’s flatted seventh). Here’s the classical world’s thinking: D# resolves to E nicely on paper; whereas E-flat doesn’t resolve so nicely to E-natural. But the notes and sound are the same as a dominant 7th chord; it’s just spelled differently so that the written music adheres to the rules of classical harmony.